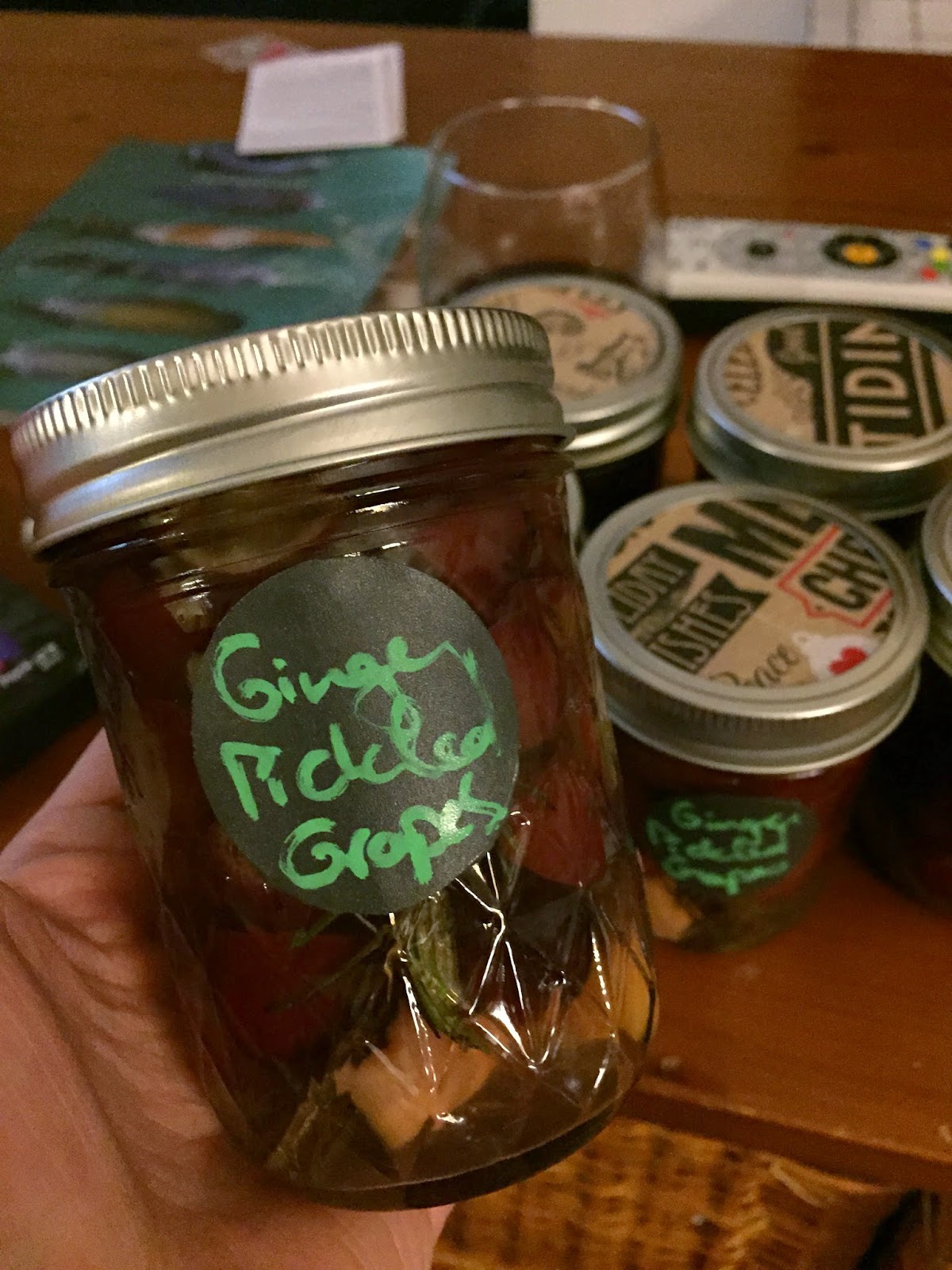 Every year I tell myself I'm not going to make all my holiday gifts.  "This year, I'm going to make it easy on myself."  And then I have a good laugh and set about making my plan for holiday gifting.  I find that so long as I have a good stable of techniques, pragmatic strategies, and delicious recipes, I survive just fine and end up being so grateful I took it on again. 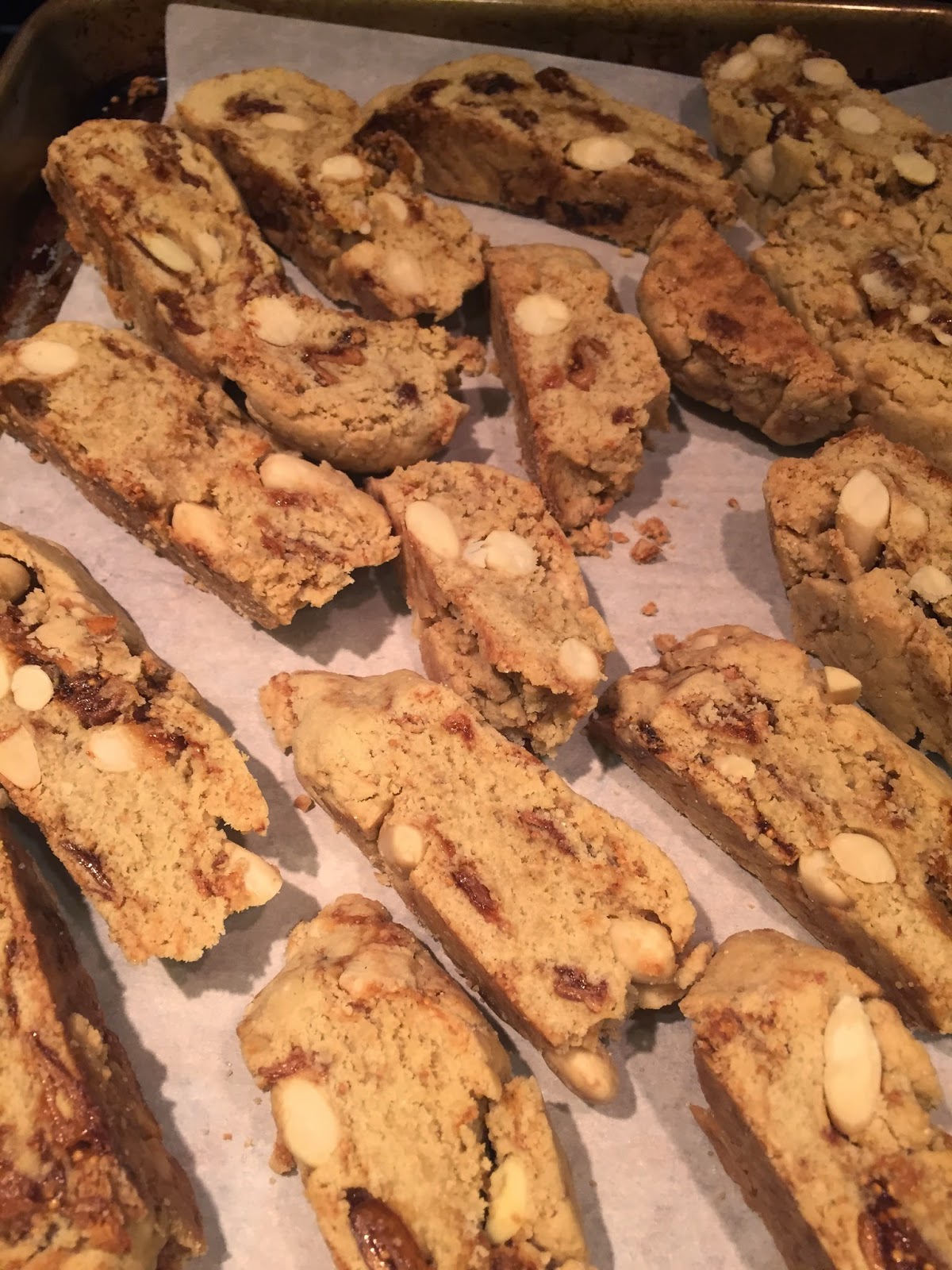 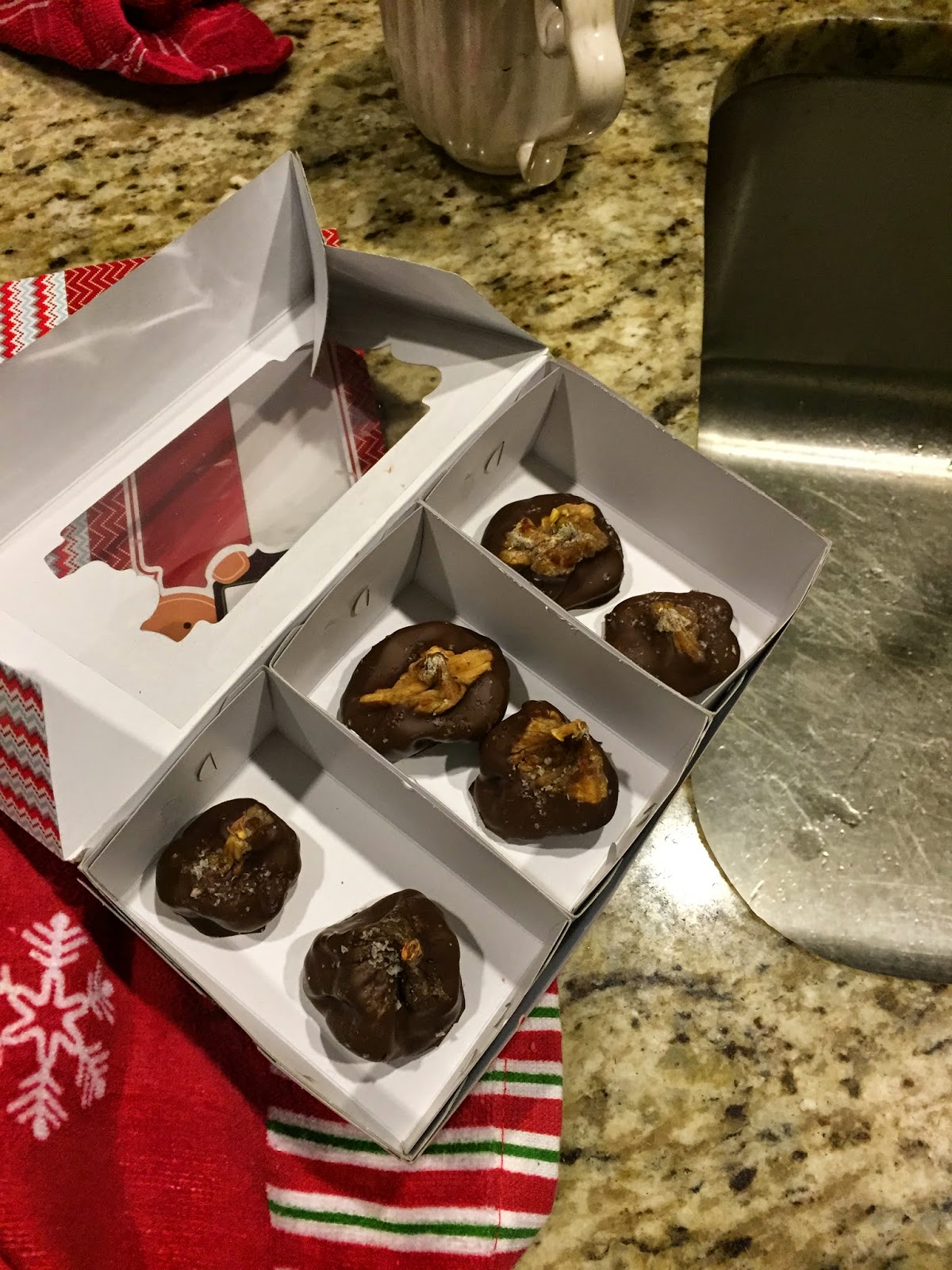 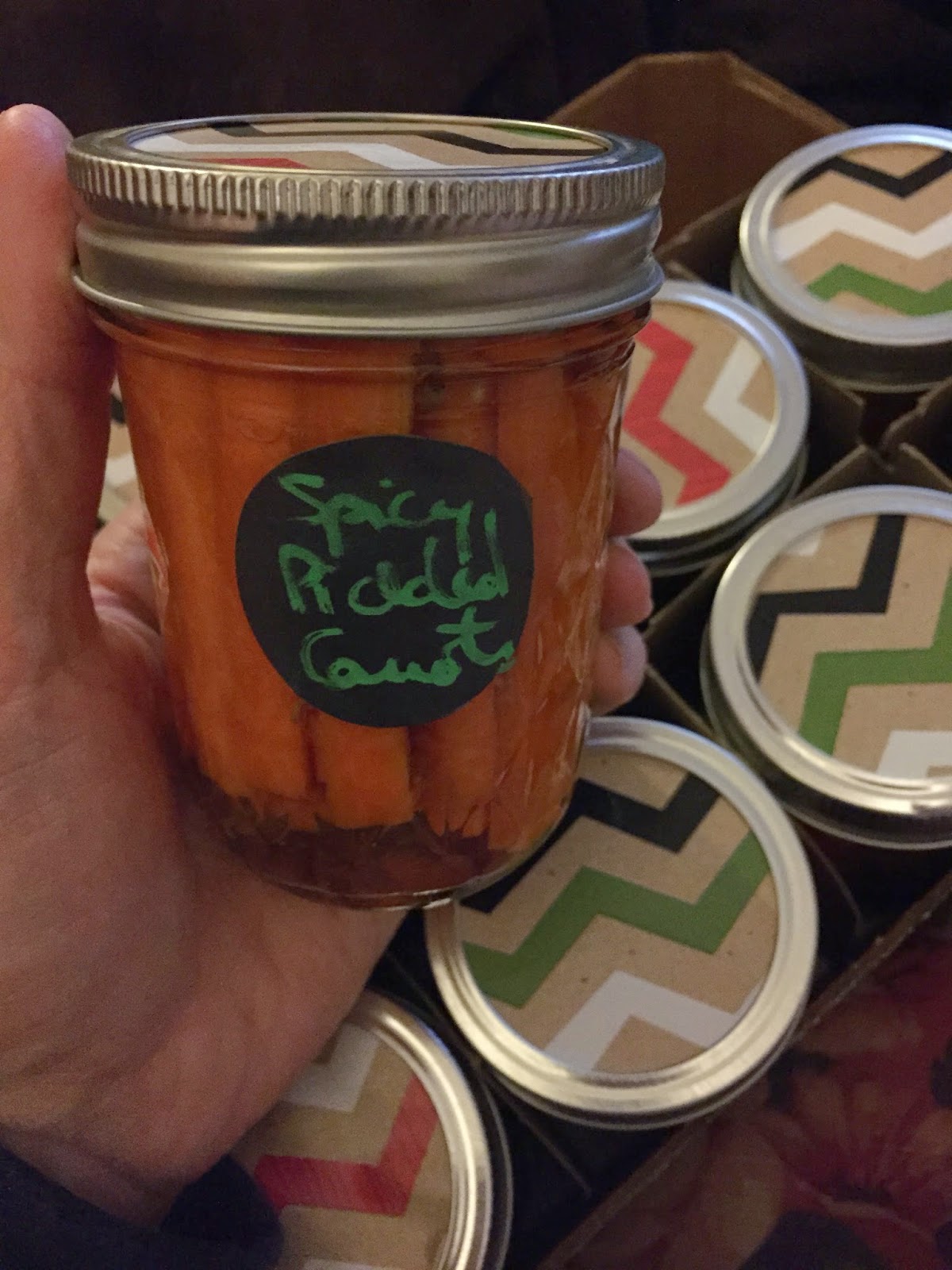 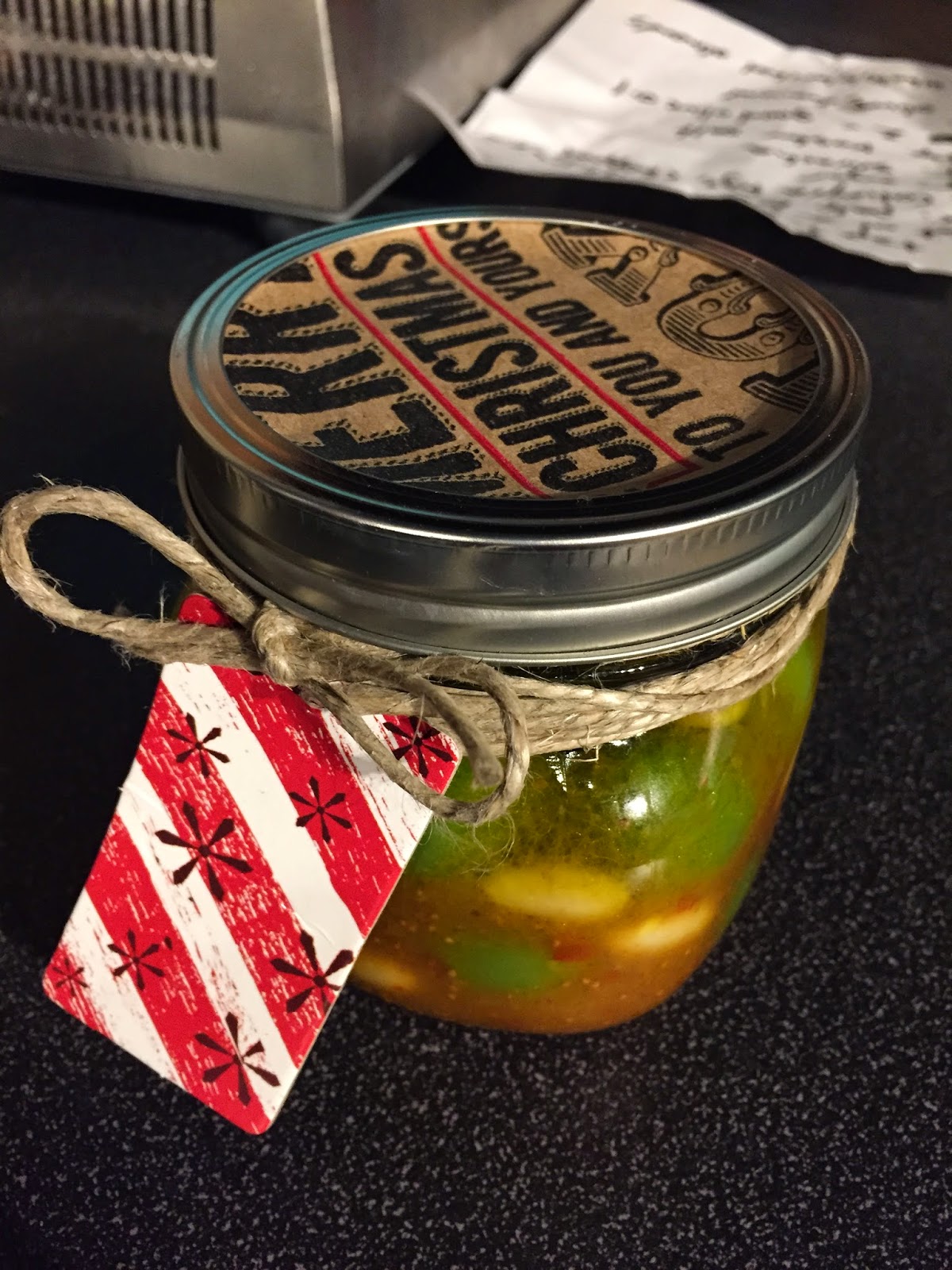 Posted by Unknown at 9:34 PM No comments:

There is something about gifting delicious food in beautiful packaging that just makes it feel like Christmas.  It's easy to walk into any store and buy presents, but making hand-crafted, handmade treats is so much less work than one might think.  It's not hard...or time-consuming...or expensive.  All you need is a strategy, a game-plan, and a few recipes.

I am a particular fan of marinated olives.  On the one hand, they make pretty gifts in jars.  On the other hand, and much more importantly, they are delicious.  This recipe was inspired by a taste memory inspired by the fantastic Holland House Bar and Refuge in Nashville, Tennessee.  If you are in town, I definitely recommend making a reservation.  In the meantime, get to marinating olives.  They are positively addictive 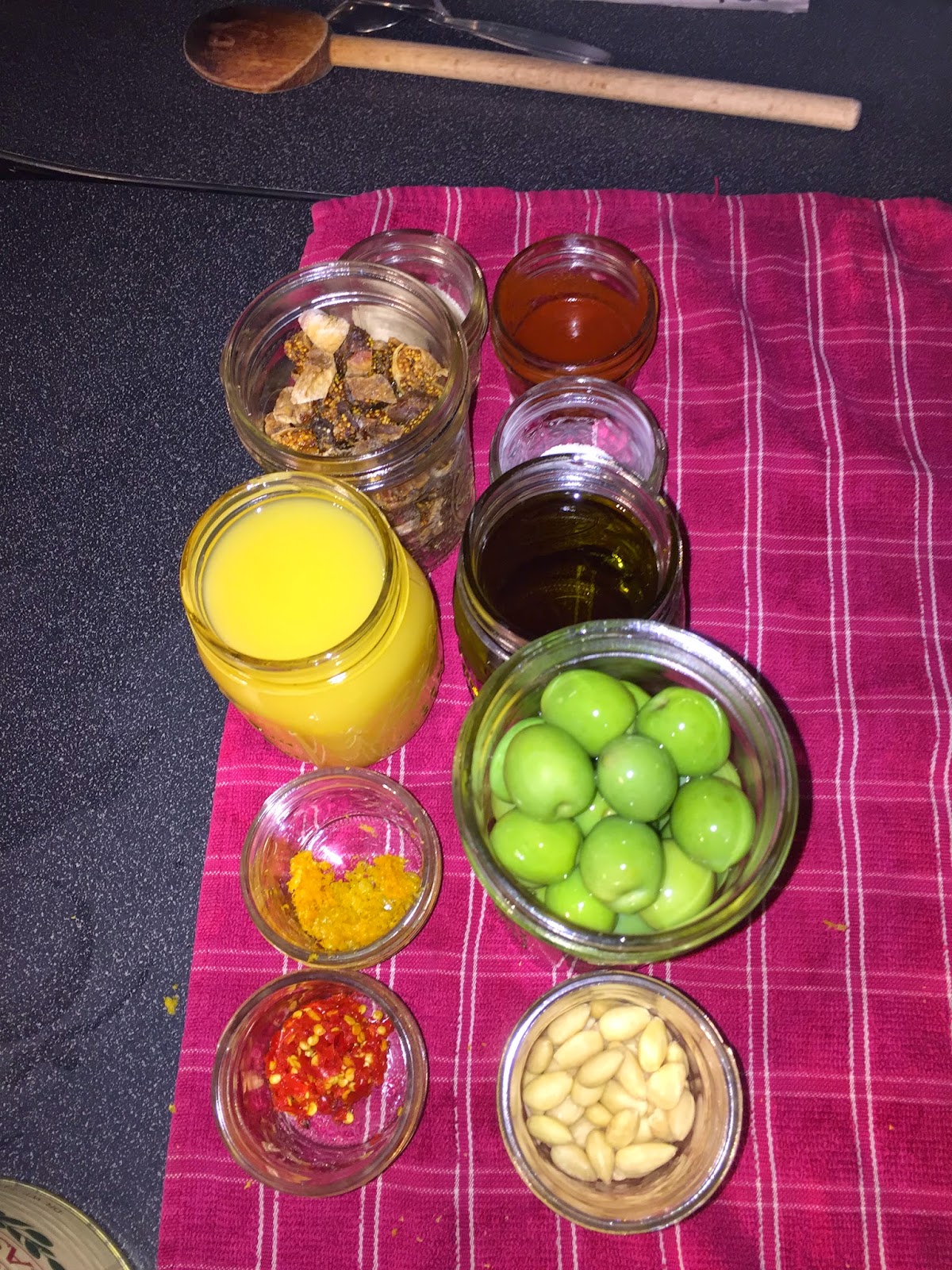 Combine the first seven ingredients in a large capacity pot.
Bring to a boil and reduce for about 10 minutes or until it starts to look syrupy.

Once the sauce has reduced to your desired consistency, stir in oil and olives.

Return to a boil, then reduce to a simmer.  Cook uncovered for about 5 minutes.

Remove from heat and stir in almonds.

Olives can be served immediately, but will benefit from a few days storage in the marinade.  Be sure to keep in the refrigerator.

I like to buy large cans of olives on Amazon.  While in my alternate, perfect world I might buy these directly from the growers in glass jars, I live in Indiana, and this is the best source I have found.  I particularly like these unpitted green olives, because they are delicious on their own and have no additional seasoning in the brine.  ALERT:  these olives are only $25 for approximately 8 dry cups.  This is beyond affordable.

I also buy the almonds on Amazon.  I burned too much gas and far too much time driving around Indy, trying to find them.  You can buy a full pound (which is many times over what you need) for $15.

As for the figs, I bought them at Costco.  In our house, we LOVE figs.  I have no trouble using up the wholesale-size bag.  Two pounds run around $10-15.

Packaging beautiful food is easy when you have clear glass jars.  The bright green of the olives plays against the earthy oil brine and needs little embellishment.  I like to cut rounds of my favorite wrapping paper to the size of the lids and simply place it between the lid and ring.  You don't need glue, tape, or anything else.  The ring secures it just fine.  Then, if I'm feeling fancy, I might wrap hemp or other twine around the jar and add a sturdy cardboard gift tag.  Be sure to let your giftees know they will need to keep the olives in the refrigerator.
Posted by Unknown at 8:21 PM No comments:

I love Thanksgiving.  It's all about food, family, friends and taking stock of what you have.  My kids and I are so fortunate.  We have our health, each other, more than enough delicious food at every meal, and our cozy home in which to enjoy it all.  I like traditional Thanksgiving, but as defined by me.  I like to take tradition and flip it. 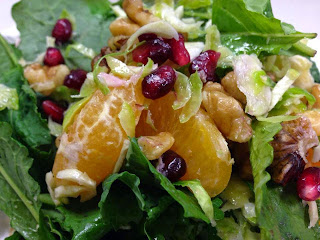 Here's a great side dish that I am making again this year.  It's easy to throw together and it's a great complement to the rich turkey dinner. 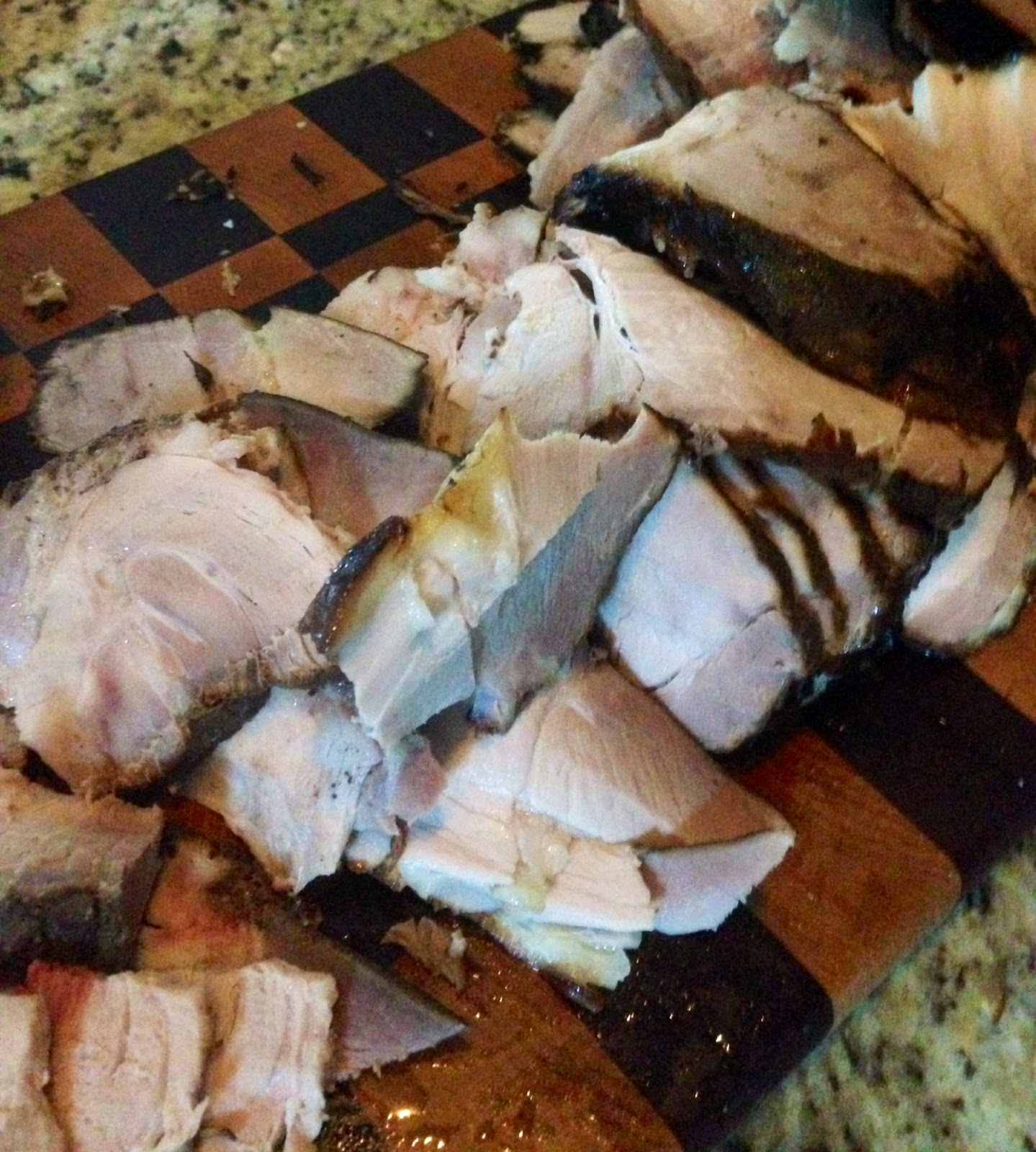 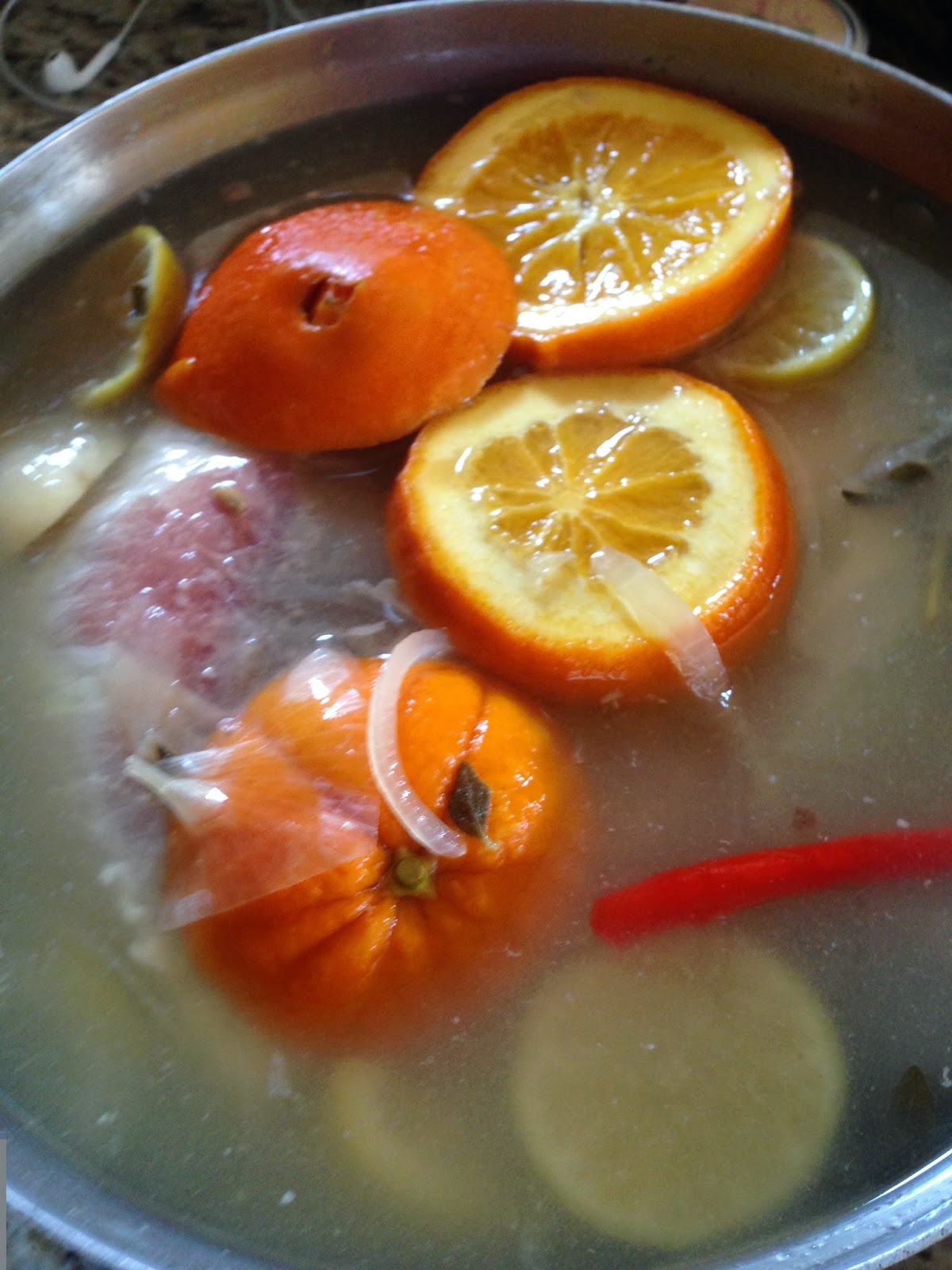 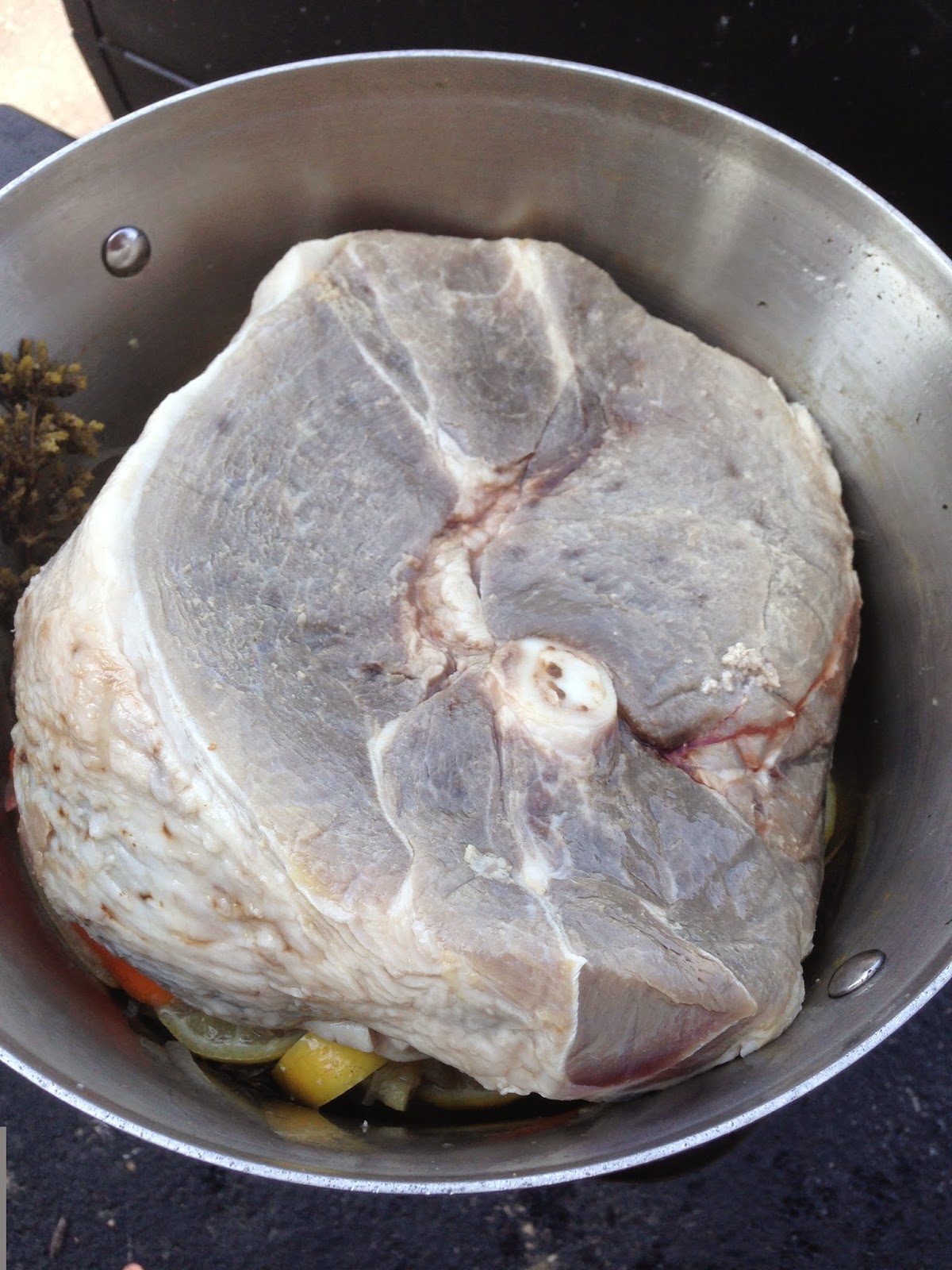 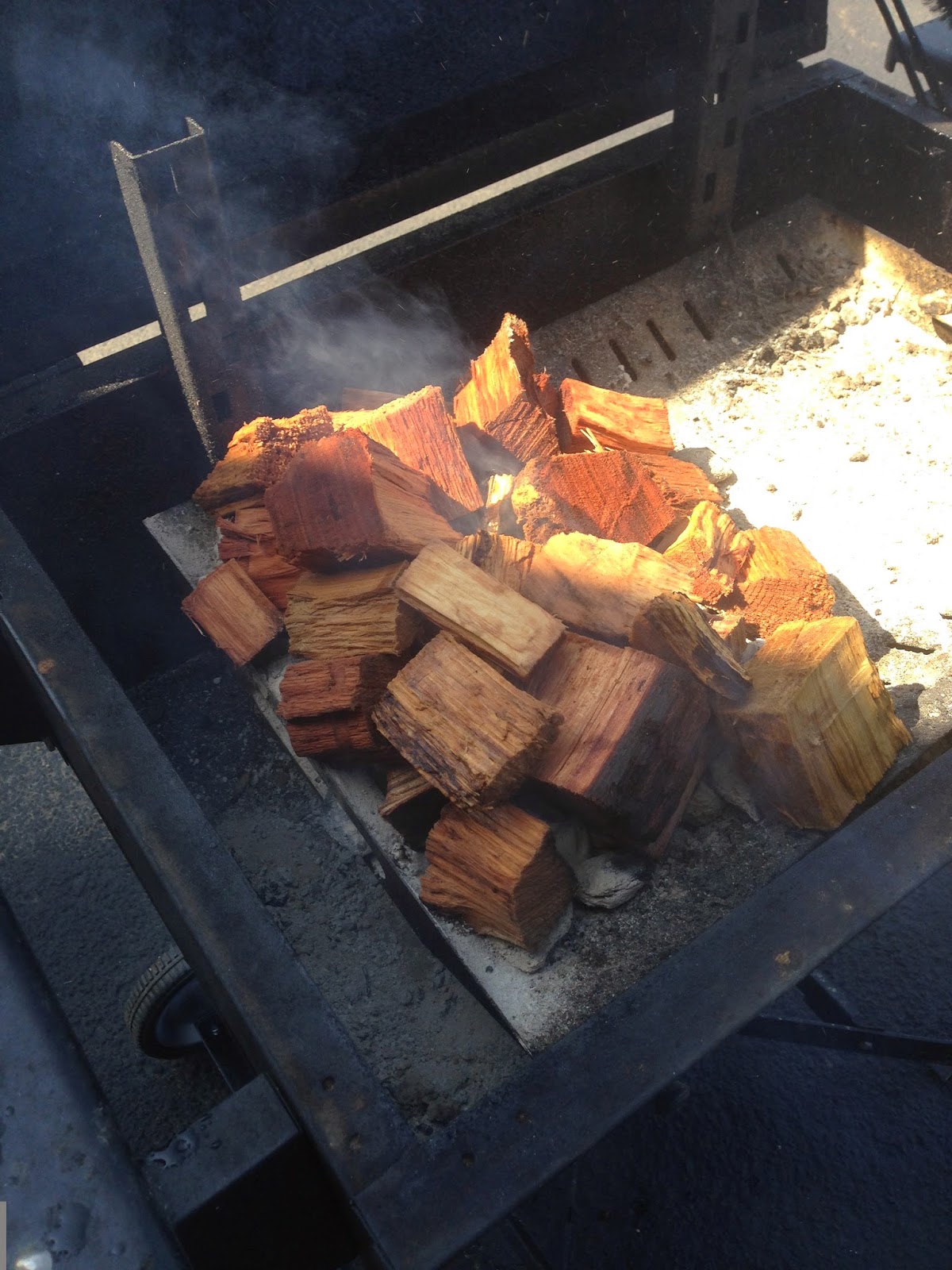 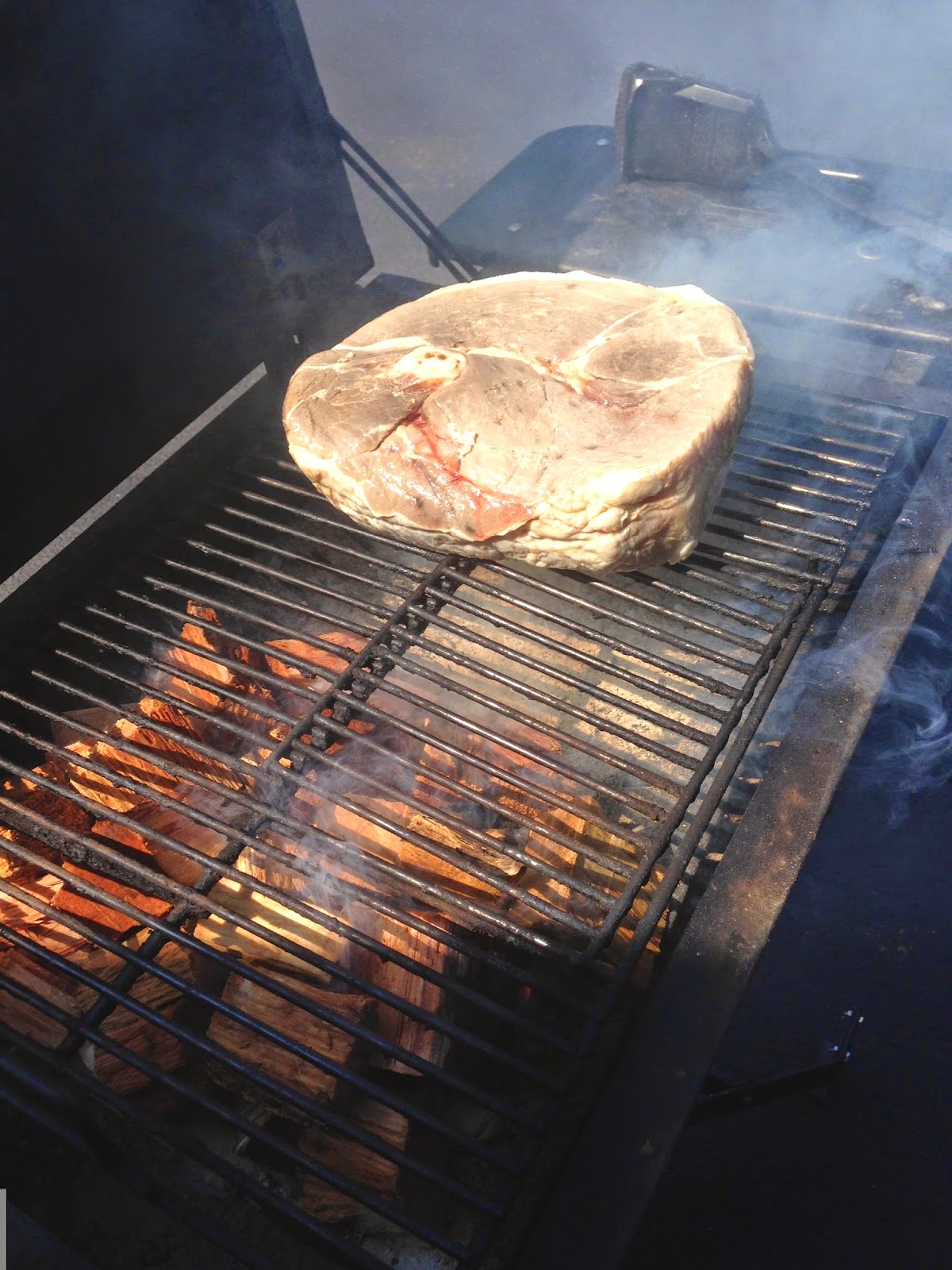 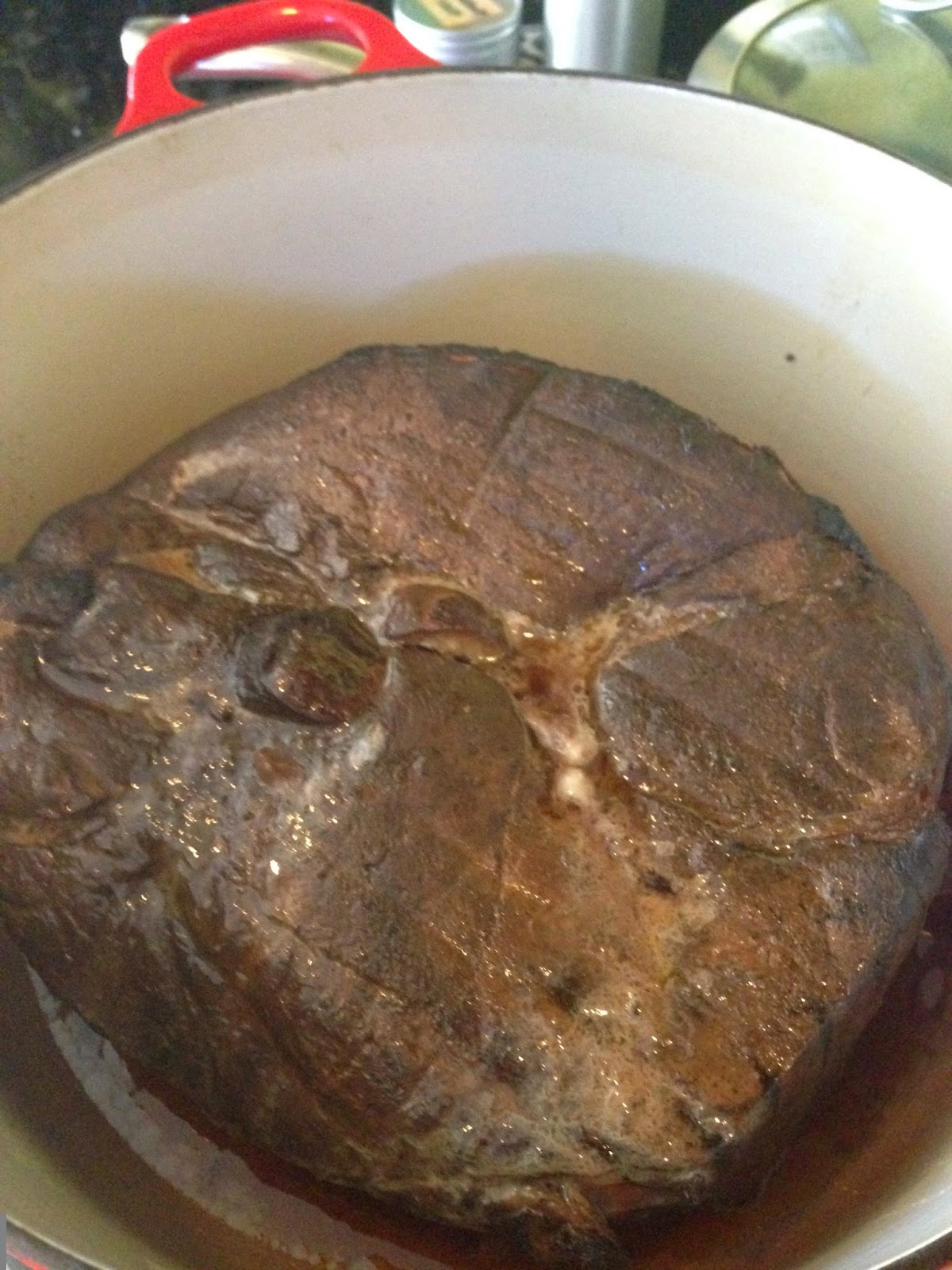 Now, try not to eat it all while standing over the cutting board.
Posted by Unknown at 10:22 AM No comments:

I have a love-hate relationship with BBQ.  I know, it's un-American, but that's how it is.  While I love to smoke fresh and/or brined meat at home, I often find the combination of heavy smoke and sticky-sweet sauce unpalatable (for me).  Then, earlier this year, I was making shrubs (drinking vinegars).  As I struggle to ever throw anything out, and am always trying to repurpose, reuse, use up everything I have, I needed to do something with all the pickled cherries I had on hand. 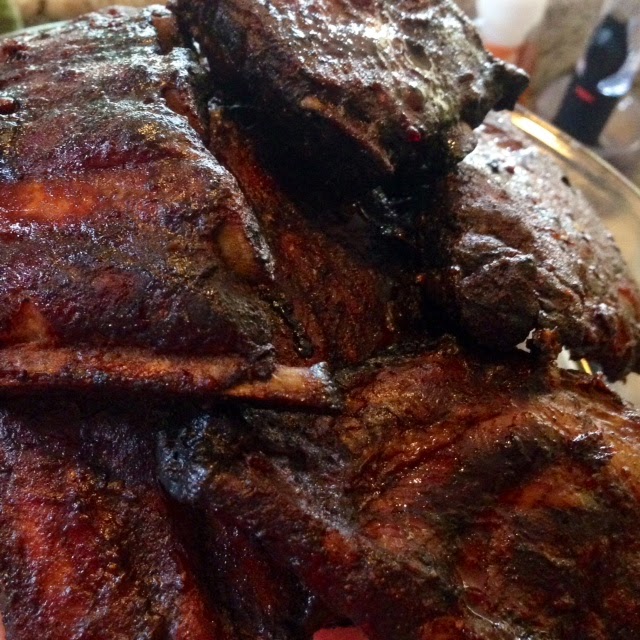 Feeling creative one Sunday, I started concocting...and it was a hit.  I love it, my 2 and 4 year old love it, my parents love it, etc. etc.

I used this on mesquite-smoked baby back ribs, but I think it would go great on any BBQ.

Chop up the cherries and mix all ingredients together. Cook over medium heat, stirring well and often until a desired consistency. I like to stop the sauce when it's still a nice, red color, and then use it as a basting sauce over open flame. If you don't intend to cook it twice, so to speak, go ahead and reduce the sauce further, almost until it turns a browner red and has the consistency expected of barbeque sauce.
Posted by Unknown at 9:17 PM No comments: 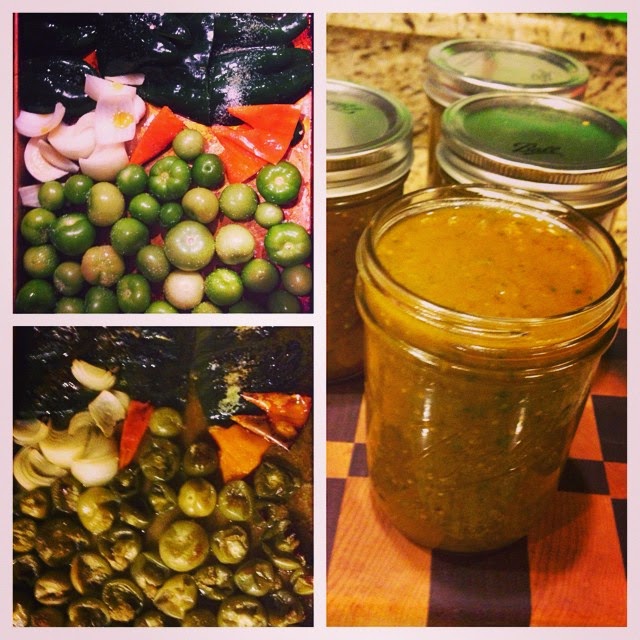 Tomatillos, tomatillos, tomatillos.  They are multiplying every time I go out to the garden.  I needed a fresh idea, after canning some two dozen jars of ubiquitous salsa verde.  But what to make?  I am always looking for things to feed my kids, and I've been pondering enchiladas.  I am notoriously dedicated to making everything I can from scratch at home, so of course, I set about to make a tasty enchilada sauce.


I did a bit of research into what goes into a traditional enchilada sauce, and since I had some Bulgarian carrot chiles that needed using, I decided to substitute for the jalapenos.  Pro/con:  Pro, this sauce is *delicious*.  I'm so very pleased with how it turned out; con, it's smokin' hot...maybe too hot for my kiddos.  C'est la vie, as it were.  I am now the happy owner of 4 pints of put up green enchilada sauce that *Mommy*, at least, will devour, come winter.


It's simple, delicious, and will thaw you out when the deep freeze hits this winter.

Remove the husks from the tomatillos, wash, and place on a baking tray.  Deseed the peppers, slicing all the way down one side and flatten on the baking tray with skins up.  Quarter the onion and separate the sections, adding them to the tray.

Drizzle the trayed veg with olive oil and sprinkle liberally with kosher salt.

Dump the veg into a large soup pot and stir in stock.  Simmer over medium-high for 15 minutes.  Chop cilantro and stir in, then puree with an immersion blender.


You will want to eat this within a week or freeze it.  The low acid content makes it a bad candidate for water bath canning, and it's not tested for pressure canning.  If you choose to not freeze, be sure to store in the refrigerator.

Posted by Unknown at 9:10 AM No comments: